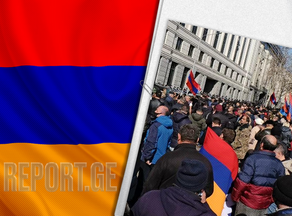 About 10,000 opponents of Armenia's PM Nikol Pashinyan convened for a rally near the Parliament in Yerevan.

They demand Pashinyan leave his post and President Armen Sargsyan not to sign the prime minister's decision on the General Staff head's resignation.

The protesters occupied a section of Baghramyan Avenue along with the National Assembly.

Police pulled large forces to the protest site but did not intervene in the developments.

The security forces blocked the avenue and lined up along the fence near the parliament building.

Protest have been underway since November 10. The opposition blames the PM for economic and social problems.