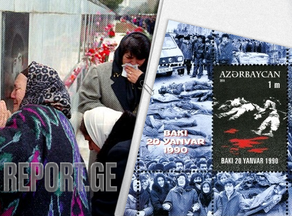 Hundreds of thousands of people followed deceased victims' coffins in the center of the city. They were buried in the park from which the magnificent views of the city can be seen. Mourners laid carnations at newly-dug graves. Carnations became traditional funeral flowers in Azerbaijan after that day.

Today, the Azerbaijani people are mourning their compatriots who were massacred on 20 January 1990, when Soviet tanks and troops took to the streets of Baku.

On 20 January 1990, Soviet Army units were brought into Baku and in several other cities of Azerbaijan. People rallied on the streets at the time, demanding independence for Azerbaijan. The brutal massacre was committed over the peaceful population in an attempt to crush the makings of an independence movement in Azerbaijan. Officially, more than 133 people were killed, 744 were injured, and 841 arrested. Among the deceased were minors, senior citizens, and women.