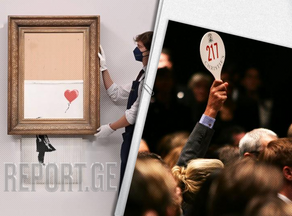 The Banksy painting that gained worldwide popularity after it was almost self-destructed in a paper-liquidating machine, sold for a record 18.6 million pounds ($ 25.4 million) at auction in London.

The auction was conducted by Sotheby's.

In order to regain copyright on several works, British street artist will have to reveal his identity.

Graffiti artist Banksy, whose main theme is social inequality and the hypocrisy of the authorities, keeps his identity a secret. Except for his very close assistants, no one knows what he looks like and what he really is called. The price of his works is estimated at millions of dollars at auction.