Charles Michel meets PM of Armenia and the President of Azerbaijan

Charles Michel meets PM of Armenia and the President of Azerbaijan 15 December, 2021  10:54 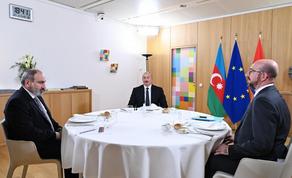 A day before the Eastern Partnership summit, European Council President Charles Michel met with Armenian Prime Minister Nikol Pashinyan and Azerbaijani President Ilham Aliyev. According to Report.ge, the statement is spread by the European Council.

According to Charles Michel, the EU will set up a special mission of experts to support the delimitation and demarcation of the border between Azerbaijan and Armenia.

He said the mission of experts would provide technical assistance to both sides.

A statement from the Council of Europe said that Charles Michel called on Yerevan and Baku to defuse tensions at the meeting.

Charles Michel noted that one of the main goals of the meeting was to create an atmosphere of trust between the two countries.

"President Michel called on both Yerevan and Baku to actively engage in good faith and work towards a de-escalation. He stressed that ensuring proper distance of forces is an essential element of incident prevention," the statement said.

At the same time, President Michel stressed the importance of restoring communication infrastructure between Armenia and Azerbaijan, and in the South Caucasus in general, with full respect for the sovereignty of all countries.