Chinese rocket that lost control on its way to earth - LIVE 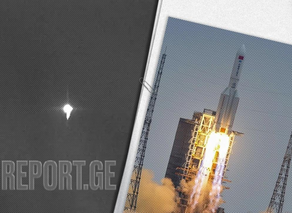 A vast Chinese rocket, which has lost control, is approaching the earth. It will enter the atmosphere in the morning of May 9.

The place where the rocket may fall is unknown. However, many organizations around the world are watching its trajectory.

Scientists say that most of the rocket will burn up when entering the planet's atmosphere, and only small parts of it are expected to reach the earth's surface.

Italian media outlets write that the wreckage of the Chinese Long March 5B missile may fall into one of 9 regions of Italy.

Following the reports from CORDS, the rocket may fall near New Zealand's North Island.

The Chinese Foreign Ministry said that most of the debris from the launch vehicle would burn up upon entering the atmosphere, so any damage from their fall to earth is doubtful.

The Pentagon predicts that the rocket will crash into the Pacific Ocean.

The rocket trajectory is available to be observed online.