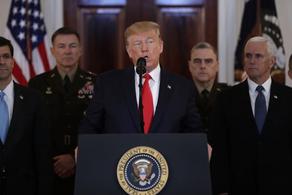 US President Donald Trump on Wednesday said that he would never allow Iran to have a nuclear weapon.

In his address to the nation after Iran's strike on US military installations in Iraq, Trump said, "As long as I am the President, Iran will never be allowed to have the nuclear weapon."

Donald Trump stressed that the missile attack on US airbases did not claim Americans' lives, and it just resulted in minimal damage.

In Trump's words, Iran was the world's leading state sponsor of terrorism. He also focused on the assassination of Qassem Soleimani.

"Last week, we took a decisive action to stop a ruthless terrorist from threatening American lives. At my direction, the United States military eliminated the world's top terrorist Qassem Solemani. As the head of the Quds force, Soleimani was personally responsible for some of the absolutely worst atrocities. He trained terrorist armies including Hazbollah, launching terrorist strikes against civilian targets; he fueled bloody civil wars all across the region; he viciously wounded and murdered thousands of US troops," the US leader said and added that Soleimani should have been "neutralized" long ago.

"The United States will immediately impose additional punishing economic sanctions on the Iranian regime. This powerful sanctions will remain until Iran changes its behavior," Trump said.

Additionally, the President called on Great Britain, China, Germany, France and Russia to enter in a new agreement with Iran.

"Iran must abandon its nuclear ambitions and end its support for terrorism. The time has come for the United Kingdom, Germany, France, Russia, and China to recognize this reality. They must now break away from the remnants of the Iran deal," the US leader stated.

Donald Trump called for NATO's more active involvement in the ongoing developments in the Middle East. He also elaborated upon the U.S. armed forces and ammunition.

"The American military has been completely rebuilt under my administration at a cost of 2.5 trillion dollars. U.S. armed forces are stronger than ever before. Our missiles are big, powerful, accurate, lethal and fast," Trump stressed.

Finally, Trump addressed to the population of Iran.

"Finally, to the people and leaders of Iran. We want you to have a future and a great future, one that you deserve," Donald Trump declared.