Due to dispersal of demonstrations 138 people get killed in Myanmar 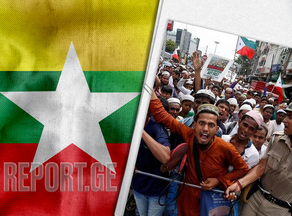 At least 138 people have been killed as a result of the dispersal of anti-military demonstrations in Myanmar, the publication Deutsche Welle reports.

Among the dead are women and children.

The UN responded to the current events in Myanmar.

"Secretary-General António Guterres strongly condemns the ongoing violence against peaceful protesters and the violation of basic human rights in Myanmar," said Stéphane Dujarric, a spokesman of the UN Secretary-General.

A military coup in Myanmar took place on February 1. Dissatisfied with the November parliamentary elections results, the military arrested political leaders, including Aung San Suu Kyi, and seized power. Protests have been going on in Myanmar cities for several days now. Their participants are protesting against the military coup in the country. A state of emergency has been declared in the country since February 1, which will last for one year. After the coup, the country is ruled by the military. Vice PresidentMyint Swe has been appointed acting president.