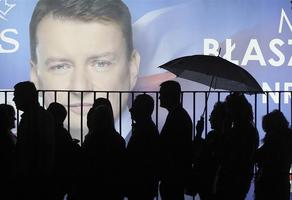 Poland is electing the government for the next four years.According to the inquiry the party in current power is leading.The right-wing party – Law and Justice is in power since 2015.Despite the recent scandal related to the problems of Judge System politization in Poland, according to the exit poles the ruling party is forecasted to get 43 percent.The leading opposition party is reported to have support from 28 percent of the voters.