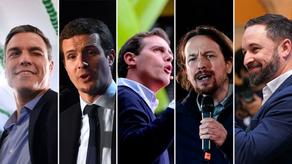 Spain is voting for a new Parliament today. These are the fifth general elections during the last four years.

The last elections, in April, saw the ruling Socialist Workers’ Party unable to form a coalition after winning the most seats – but not the majority in Parliament of Madrid.

Prime Minister, Pedro Sanchez, entered coalition talks with the leftist party, but these collapsed causing them to miss a September deadline to form a new government.

At a closing rally Sanchez told the supporters: “There are only two options: either vote for the Socialists so that we have a government, or vote for any other party to block Spain from getting a progressive government”

The latest opinion polls show Socialists are leading again. The party of conservative ideology Popular Party and Vox are making gain, but none of the parties winning a majority