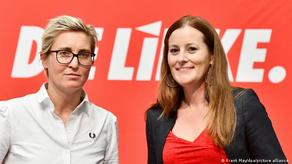 Germany's socialists have had a hard time making themselves heard during the coronavirus pandemic, yet some of their ideas have become mainstream, Deutsche Welle reports.

The coronavirus has forced Angela Merkel's government to make "big government" interventions, casting aside its commitment to a balanced budget to take on new debt and offer huge bailouts to hard-hit sectors of the economy.

And yet opinion polls have the Left party in fifth place, at 7% or 8%. One recent Deutschlandtrend poll saw the party as low as 6%, hovering precariously above the 5% hurdle it needs to clear to re-enter the Bundestag this September.

So it's time for new blood, and at this weekend's virtual party conference the Left party has elected two new leaders to replace Katja Kipping and Bernd Riexinger, who have led the party since 2012.

Susanne Hennig-Wellsow and Janine Wissler have been voted in as the Left's new co-leaders during the online conference, and are expected to be confirmed by the party's rank and file.