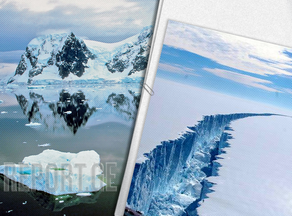 A giant iceberg, more than 20 times the size of Manhattan, just split off from Antarctica's Brunt Ice Shelf. This dramatic breakup comes after a major crack formed on the shelf in November 2020 and continued to grow until the 'berg finally broke off Friday morning, Live Science reports.

The so-called "North Rift" crack is the third major chasm to actively tear across the Brunt Ice Shelf in the last decade, and so scientists with the British Antarctic Survey (BAS) were absolutely expecting the split.

"Our teams at BAS have been prepared for the calving of an iceberg from Brunt Ice Shelf for years," Dame Jane Francis, the director of the BAS, said in a statement. "Over [the] coming weeks or months, the iceberg may move away; or it could run aground and remain close to Brunt Ice Shelf."