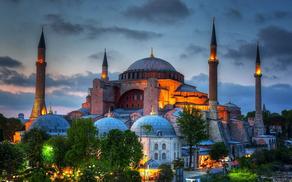 Media outlets write that this will pave the way for turning the Hagia Sophia into a mosque.

The Hagia Sophia got built during the Byzantine Empire in the VI century. It was converted into a mosque by the Ottoman Empire in the XV century. The facility now has the status of a museum, and it is included in the UNESCO list.

The Turkish government has repeatedly taken the initiative to turn the Hagia Sophia into a mosque.