Holidaymaker poses for shot before giant wave wipes her out - VIDEO 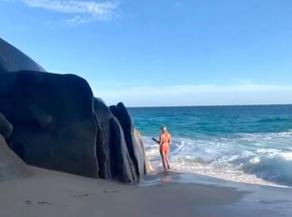 A bikini-clad beachgoer has had a lucky escape after being battered and swallowed by a freak giant wave in Mexico.

Nicole Boutin, from Boston, US, was trying to take a picture at the picturesque Divorce Beach in Cabo San Lucas, the southernmost tip of the Baja California peninsula.

As she poses by a giant rock on the shoreline and waits for her friend Macy Nix to click the shutter, a big wave strikes and engulfs her in whole seconds it floods the coast.

Macy is heard yelling 'Oh my God!' before running to Nicole, who completely disappeared from view.

Nicole was crushed and swept off her feet but she managed to get up.

Friend Macy said: "I was terrified and I thought she smashed into the rock as I yelled and took off towards her and she popped up.

"Luckily, she managed to keep her sunglasses."