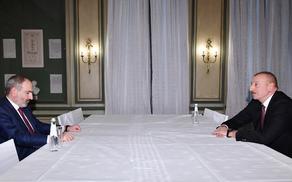 The President of Azerbaijan Ilham Aliyev and the Prime Minister of Armenia, Nikol Pashinyan, will meet for the second time in less than a month today. According to report.ge, the Azerbaijani media spread the information.

The talks will be held in Brussels with the participation of the President of the Council of Europe, Charles Michel, where the Eastern Partnership summit will be held the next day.

Earlier, Charles Michel will hold a bilateral meeting with Ilham Aliyev, then the President of the Council of the European Union will hold talks with Nikol Pashinyan.

Aliyev and Pashinyan last met on November 26 in Sochi. The meeting was tripartite and attended by Russian President Vladimir Putin. Its main result was the decision to establish a border demarcation and delimitation mechanism between the countries.