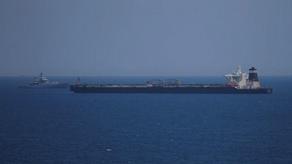 An explosion damaged an Iranian oil tanker traveling through the Red Sea near Saudi Arabia, causing oil leak into the Red Sea.

According to ISNA news agency’s anonymous source the vessel was on fire.

Iran’s Nour news agency, close to Iran’s Revolutionary Guards, said the situation was under control and no crew members were injured.

The oil tanker belongs to the Iranian state oil company.

Iran claims oil tanker has been attacked by terrorists.