Minister of Foreign Affairs of Azerbaijan speaks about tripartite statement 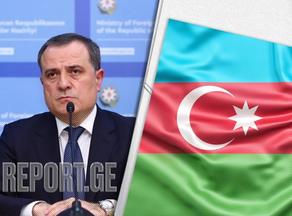 The tripartite statement made by the leaders of Azerbaijan, Armenia, and Russia on January 11 of 2021 concerns the opening of new communications in the region, the creation of transport and transit corridors.

The statement came from the Minister of Foreign Affairs of the Republic of Azerbaijan, Jeyhun Bayramov, at a press conference with his Kazakh counterpart Mukhtar Tleuberdi, the local media reports.

According to him, there are some delays in the implementation of this statement.

"One of the main reasons for this is the deep political crisis that has recently been observed in the Republic of Armenia," the Minister added.

On January 11 of 2021, at a meeting in Moscow, the leaders of Azerbaijan, Armenia, and Russia decided to set up a special working group at the level of vice-prime ministers aimed at establishing transport and economic ties.