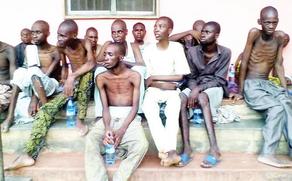 Nigerian police rescued 259 people who were being held in the Islamic Rehabilitation Center in the city of Ibadan.

"259 people have been released. They were locked up in the building. Several of them were in chains", police said.

Nigerian police rescued another 70 people from the Islamic school on October 17, who were sexually abused and physically assaulted.

Police also rescued 300 people in the town of Kaduna, most of them children between the ages of 5 and 16 on September 7.