Pence has not ruled out 25th Amendment 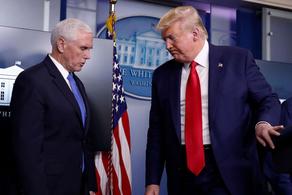 Vice President Mike Pence has not ruled out an effort to invoke the 25th Amendment and wants to preserve the option in case President Donald Trump becomes more unstable, a source close to the vice president says, CNN reports.

The source said there is some concern inside Pence's team that there are risks to invoking the 25th Amendment or even to an impeachment process, as Trump could take some sort of rash action putting the nation at risk.

As of Saturday evening, Trump and Pence still have not spoken since the Wednesday incursion at the US Capitol that left five people dead, including a Capitol Police officer, another source told CNN. The President has also not made any public comments denouncing death threats that have been posted on social media targeting Pence.

Pence has finally "gotten a glimpse of POTUS's vindictiveness," one source said, using the acronym for President of the United States.

Two sources familiar with the matter say Trump is angry at Pence and Pence is disappointed and saddened by Trump.