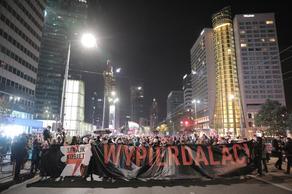 Protests continue across Poland after the Constitutional Tribunal ruled on Thursday that abortion due to foetal defects was unconstitutional, banning the most common of the few legal grounds for ending a pregnancy in the largely Catholic country, Reuters reports.

After the ruling goes into effect, abortion will only be permissible in Poland in the case of rape, incest or a threat to the mother’s health and life, which make up only about 2% of legal terminations conducted in recent years.

The development pushes Poland further away from the European mainstream, as the only EU country apart from tiny Malta to severely restrict access to abortion, Reuters says.

Hundreds marched toward the house of governing party leader Jaroslaw Kaczynski on Thursday night after the ruling, some carrying candles and signs that read “torture”. Most wore face masks to comply with coronavirus pandemic restrictions.

Police in riot gear had cordoned off the house.

The Warsaw Police said on Twitter that it reacted with pepper spray and physical force after protesters threw stones and tried to push through the police line.