Pope Francis arrives in Mosul on tour of Iraq 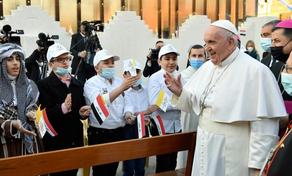 Pope Francis has led prayers in Mosul on his tour of Iraq - a former stronghold of terror group Islamic State, Sky News reports.

The Pope flew in by helicopter from nearby Erbil, and was greeted by crowds in the decimated northern Iraqi city, where just a handful of Christian families now live.

Thousands of Christians fled the area during the IS occupation, where they were faced with conversion, death, or paying a tax for non-Muslims.

On the way to the venue, he stopped by the ruins of homes and cathedrals that had been destroyed by IS violence, to hold a moment of silence.

BREAKING: Pope Francis has arrived in Mosul on his tour of Iraq, a former stronghold of terror group Islamic State.@Stone_SkyNews has the latest.

He then took part in the service from a once-bustling city square, surrounded by the ruins of several damaged churches, which were destroyed when IS overran the area in 2014.

"How cruel it is that this country, the cradle of civilization, should have been afflicted by so barbarous a blow, with ancient places of worship destroyed and many thousands of people - Muslims, Christians, Yazidis and others - forcibly displaced or killed," he told the crowd.