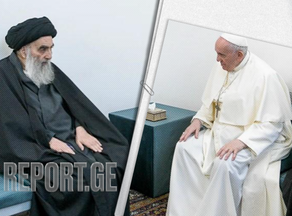 Pope Francis has met with Grand Ayatollah Ali al-Sistani, one of the most senior leaders in Shia Islam, in Iraq’s holy city of Najaf to deliver a message of peaceful coexistence, urging Muslims to embrace Iraq’s long-beleaguered Christian minority, Al Jazeera reports.

The historic meeting on Saturday in al-Sistani’s humble home was months in the making, with every detail painstakingly discussed and negotiated between the ayatollah’s office and the Vatican.

After the meeting, al-Sistani office released a statement that said religious authorities have a role in protecting Iraq’s Christians and that the Shia leader “affirmed his concern that Christian citizens should live like all Iraqis in peace and security, and with their full constitutional rights”.

The Vatican said Francis thanked al-Sistani and the Shia people for having “raised his voice in defence of the weakest and most persecuted” during some of the most violent times in Iraq’s recent history.