Trump praises himself and police officers for quelling protest

Trump praises himself and police officers for quelling protest 2 June, 2020  18:55 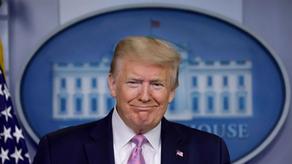 Last night, around 700 citizens were arrested in N.Y., with this bringing the total number of detained activists to 2,000, NBC reported.

The tensions remain high in the country.

The autopsy confirmed that George Floyd was murdered.

The commotion and public protests started here a couple of days ago.

The public outcry was stirred by 46-year-old Floyd's murder. Floyd, a Black man who was handcuffed by police officers, died after the white officer ignored bystander shouts to get off him and Floyd's cries that he couldn't breathe. His death, captured on citizen video, sparked days of protests in Minneapolis that have spread to cities around America.

The officer who held his knee on Floyd's neck, Derek Chauvin, has been charged with third-degree murder and manslaughter and is in custody in a state prison. The other three officers on scene, like Chauvin, were fired the day after the incident but have not been charged.

The Department of Justice said that its investigation into the police killing of George Floyd in Minneapolis is a “top priority” after violent protests broke out in the city.