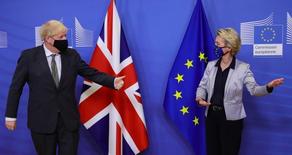 Britain and the EU have taken a step forward towards striking a historic trade and security deal after a telephone call between Boris Johnson and Ursula von der Leyen offered grounds for talks to resume, The Guardian reports.

Johnson set no new deadline for talks to continue. “I’m afraid we’re still very far apart on some key things, but where there’s life, there’s hope. We’re going to keep talking to see what we can do,” he said. “The UK certainly won’t be walking away from the talks.”

The prime minister said he wanted to involve other European leaders in the talks but was rebuffed again by the commission. “The commission is very determined to keep the negotiations the way that they have been done between us and that’s fine,” he said.

However, Johnson said businesses and UK citizens should still prepare to leave the EU with no deal on 31 December, which Johnson characterises as “an Australia-style deal”.