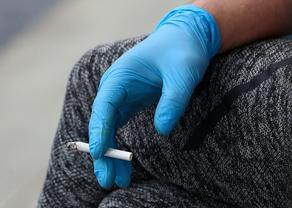 The World Health Organization (WHO) called on tobacco and nicotine industries across the world to stop taking advantage of the global pandemic and marketing directly to children and teens.

Ruediger Krech, health promotion director at the WHO, said Thursday that more than 40 million teenagers around the globe have already started to use tobacco.

“We've made great strides… but we've also had some setbacks. If we are not careful, we may lose ground in tobacco control as the industry persists and is looking to hook a new younger generation on its products,” Krech said.

Every year on May 31, the WHO celebrates World No Tobacco Day (WNTD) to raise awareness on the deadly effects of smoking.

“We see hundreds of thousands of people - of smokers - wanting to quit during this crisis," Krech said. "There's a huge uptake of tobacco cessation programs and demand to us to support people in quitting smoking.”

Countries like Mexico, India, Jordan, Indonesia and China, along with parts of central and eastern Europe, have all seen an increase of cessation during the pandemic.

"We are now looking for new technology solutions to make available to help those who want to quit,” Vinayak Prasad, coordinator with the No Tobacco Unit at WHO, said.

WHO said in a statement that it is launching a kit aimed at teenagers to “alert them to the tobacco industry tactics used to hook them to addictive products.”