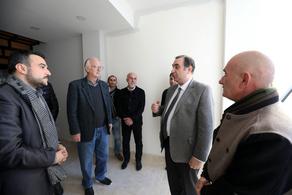 A special event has been held to celebrate the Georgian Theatre Day, with Alibeglo drama theatre creative team -- which has visited Georgia precisely for this purpose -- having been involved in it. Within the event, the members of the Alibeglo theatre creative team were awarded certificates of appreciation for their contribution to the promotion of the Georgian culture.

Anzor Dolenjashvili, the founder of the theatre, was awarded the Sandro Akhmeteli Prize, and the theatre authorities were granted certificates of contribution.

Mikheil Chkhenkeli, the Minister of Education, Science, Culture and Sport, has personally congratulated the Georgian theatre creative team on the Georgian Theatre Day and wished them professional success.