Screening of Shindisi in Los Angeles 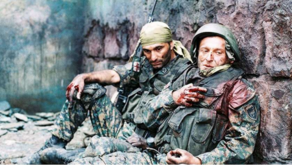 As part of the Oscars and the Golden Globe campaign - #TheWrapScreeningSeries, a screening of film Shindisi was held in Los Angeles.

After the screening, a discussion was held between Dimitri Tsintsadze the Director of the film and Vladimir Kacharava, the Producer.

The screening was attended by members of the American Film Academy and international media.

Shindisi tells the story of 17 Georgian soldiers who died in an unequal battle in the village of Shindisi on August 11, 2008 during the war with Russia. The film was selected as the Georgian entry for the Best International Feature Film at the 92nd Academy Awards.

Next screenings of Shindisi are scheduled on November 7 and 8.