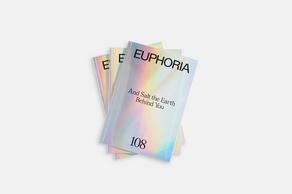 The studio A24 has presented a series of 8 books, which describes the work on the debut season of the TV series "Euphoria."

Each book tells the story of one episode of "Euphoria."

Their names are on the cover.

Books will be available for purchase from April 27.

"Euphoria" is an American teen drama series written and directed by Sam Levinson for HBO. It is based on the Israeli series of the same name. In Euphoria, the story follows a group of high school students through their sexual experiences, drugs, friendships, love, identity, and trauma. Zendaya plays the main character in the series, followed by Maude Apatow, Angus Cloud, Eric Dane, Alexa Demie, Jacob Elordi, Barbie Ferreira, Nika King, Storm Reid, Hunter Schafer, Algee Smith, Sydney Sweeney, and Colman Domingo, among others. The series premiered on June 16, 2019.