Irakli Fangani, arrested for attacking the MP released on bail 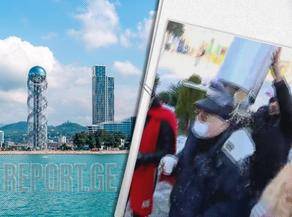 Batumi City Court granted the motion of the Prosecutor's Office and released Irakli Fangani, arrested on the charge of persecuting MP Irakli Chavleishvili, as a measure of restraint.

The amount named by the prosecution was reduced to GEL 2 000. In addition, once a week, Fangani should report to the investigator. The victim Irakli Chavleishvili was not present at the hearing.

The pre-trial hearing was scheduled for February 15.

One of the protesters, Irakli Fangani, a member of the Alternative movement, threw garbage at Irakli Chavleishvili, an MP who came to the protest rally on Batumi Boulevard.