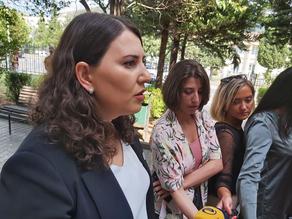 The Mtskheta Court is examining the case of the juveniles arrested over young footballer Giorgi Shakarashvili's murder.

Six underages are in detention.

Prosecutor Nana Gugutishvili says that the Plaintiff will present a motion on the introduction of new evidence, i.e., the video footage showing the accused moving and organizing the crime.

Prosecutor Gugutishvili says the court will accept the motion.

In her words, the Plaintiff will deliver a speech before the court over the six juveniles.

''The Plaintiff has a reasonable expectation that the court will hold the juveniles responsible,'' Gugutishvili said.

As a reminder, on August 12, the Chief Prosecutor's Office of Georgia warned the charged ones' lawyers on non-disclosure of the Shakarashvili murder case materials.

Lawyers of Archil Gagnidze (one of the accused) refused to sign the non-disclosure agreement.

On August 13, a lawyer was appointed via the treasury rule for the accused.

The Prosecutor's Office examines the issue of 11 detainees individually, while five under arrest face aggravated charges.

Police were informed on the disappearance of Giorgi Shakarashvili on June 19, 2020. Four days later, he was found dead in River Aragvi.