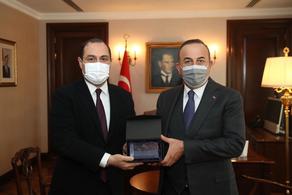 The Ambassador of Georgia to Turkey, Giorgi Janjgava, met with the Minister of Foreign Affairs of Turkey, Mevlüt Çavuşoğlu, the Embassy of Georgia in Turkey reports.

According to the embassy, the sides discussed bilateral and multilateral relations during the meeting, including trade and economic cooperation and ongoing processes in the region. The importance of high-level visits and meetings planned in the near future also got stressed during the conversation.

The parties noted with satisfaction the positive dynamics of friendly relations and strategic cooperation between the two countries, which started formation in the last century. The importance of the 100th anniversary of the opening of Georgia's first diplomatic mission in Ankara was especially noted.

At the end of the meeting, the parties agreed to continue working for the benefit of the two countries to deepen cooperation further.