Carl Hartzell: We work with businesses to solve problems 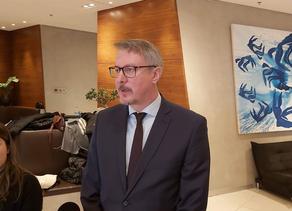 "The European Union is Georgia's largest trading partner and work is underway to resolve the problems," Carl Hartzell, the EU Ambassador, told reporters in response to a question regarding US congressman.

"I would not comment on individual letters. The issues that are in connection with the business environment are very complex and extensive," Carl Hartsell said.

The member of the House of Representatives of the USA Congress, Marqwayne Mallin, wrote a letter to Giorgi Gakharia, the Prime Minister of Georgia. According to Mallin, despite Georgia's progress since it declared its independence, the recent years have revealed a continued negative trend in democratic and free-market economic indicators that have not gone unnoticed by the United States.