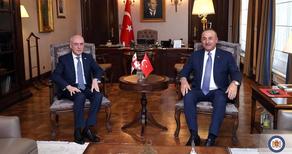 Vice Prime Minister and the Minister of Foreign Affairs of Georgia Davit Zalkaliani met with his Turkish counterpart Mevlüt Çavuşoğlu during his official visit to the Republic of Turkey. The meeting was held both face-to-face and in an extended format.

According to Zalkaliani, it is an important period in Georgian-Turkish relations; the recent developments in the region require immediate close coordination and reconciliation of positions on both sides. The Minister thinks that the visit is a good opportunity for the parties to discuss all the key issues relevant not only in bilateral relations but also in the regional context.

"As you know, Turkey is an apparent supporter of Georgia, our Atlantic integration, our sovereignty, our territorial integrity. In addition, Turkey is a key strategic partner, involved in strategic projects of geopolitical importance, and is also one of the important trading partners," Zalkaliani said.

According to the Georgian Foreign Minister, since the Black Sea region is of great importance, one of the main topics to be discussed during the meetings will be regional security.

"The issues to be discussed during the official visit to Turkey will be cooperation in the Black Sea region and beyond it and emphasis on Georgia as a connecting country," Davit Zalkaliani noted.

One of the topics covered will be pandemic. Turkish assistance to Georgia during this period was serious as the two countries have common challenges in defeating the pandemic and economic rehabilitation.

The visit was assessed by the Ambassador Extraordinary and Plenipotentiary of Georgia to Turkey. According to Giorgi Janjgava, Davit Zalkaliani is paying an official visit to Ankara for the first time as Deputy Prime Minister. During this visit, very important issues will be discussed, both in terms of bilateral relations and the ongoing processes in the region.

The ambassador also noted that the paused relations due to the COVID-19 pandemic would be renewed in various directions, such as cooperation in energy, trade, agriculture, or other areas.

According to him, in addition to the Turkish Foreign Minister, Davit Zalkaliani will also meet with the Vice President of Turkey. At the end of the visit, Davit Zalkaliani will visit the Embassy of Georgia in Ankara, where the 100th anniversary of the opening of the diplomatic mission is symbolically celebrated.