Davit Zalkaliani: This is the most important step towards democracy 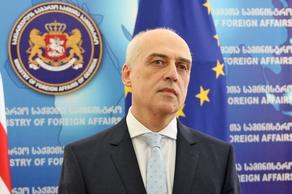 Davit Zalkaliani, the Minister of Foreign Affairs, responds to the adoption of the constitutional amendments by the Parliament of Georgia on his official Twitter page.

"Adopting constitutional amendments is a crucial step taken by Georgia towards establishing itself as a European democracy," Zalkaliani writes.

According to the Minister, "Today's voting in Parliament is a step toward Georgia's EU&Euroatlantic integration."

In a Twitter post, Zalkaliani thanked the facilitator ambassadors. The Minister believes that the successful end of the political dialogue is due to the active involvement of the ambassadors.

Bidzina Gegidze and Kakha Okriashvili from the Georgian Dream and independent deputy Alexandre Erkvania, who left the majority a few months ago in protest, did not support the changes.