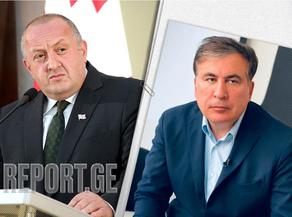 ''I had an extremely interesting, productive, and long meeting with Mr. Margvelashvili. Despite the serious political discrepancies, I cannot hold back from pointing out that president Margvelashvili is worthy of respect. I want to list the factors why:

It is essential for me that, unlike many others out there, Giorgi Margvelashvili refused to use his position for personal gains and acquiring wealth. After leaving the post of president, he lives the life of an ordinary man.

I was convinced that he takes poor people's hardships close to his heart. I cannot challenge his patriotism either and pro-Western orientation. I also appreciate his initiatives regarding dialogue between the acting and former presidents and ending political retributions. Furthermore, he boldly states that I am Putin's personal prisoner.

Also, it must be duly appreciated that he undertook the responsibility to play the role of a consolidator. Georgia needs this now immensely, and both Salome Zurabishvili and Giorgi Margvelashvili can play a historic role now,'' Saakashvili's note reads.

The meeting between the two ex-presidents lasted for three hours and a half.