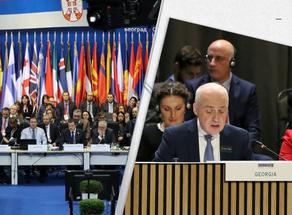 Georgian Foreign Minister Davit Zalkaliani has made a speech at the 28th OSCE Ministerial Council in Stockholm.

In his speech, Zalkaliani stressed that in order to maintain peace in the region, they must convey a straightforward message to Russia which will make it clear that the violation of the norms of international law is unacceptable.

Zalkaliani stressed that despite repeated appeals from the International Community, Russia still disregards its international obligations, refusing to comply with the 2008 Ceasefire Agreement. In the Georgian minister's words, Russia continues pursuing its occupation policy, holds illegal military exercises, and keeps building new Berlin Walls with its kilometers-long barbed wires and fences in the heart of Georgia.

According to Zalakliani, Georgia is one of the first victims of Russia's hybrid warfare agenda. The minister emphasized that by pursuing its illegal actions, Russia is dealing a blow to the entire European security architecture.

Davit Zalkaliani also focused on Georgia's readiness to promote peace and development in the region of the South Caucasus by facilitating the dialogue between Azerbaijan, Armenia, and Georgia in different formats. He also mentioned the Peaceful Neighborhood Initiative, which Georgian Prime Minister Irakli Gharibashvili put forth at the UN General Assembly.