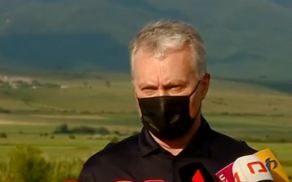 ''I stand here to say Lithuania will never recognize the occupation of South Ossetia and Abkhazia,'' Lithuanian President Gitanas Nausėda told journalists near the occupation line.

Mr. Nausėda also stated that he deemed it important to get familiarized with the people's living conditions and the existing humanitarian situation. In his words, locals live in hardship and are deprived of water supply, chances to get an education or pensions. ''The issue remains unsolved, with the territories still occupied,'' he declared.