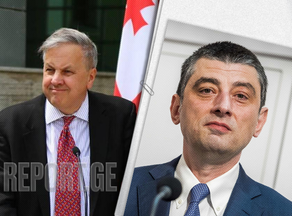 "The right move and the right tone. The Georgian govt needs a dialogue with the opposition, not more confrontation."

Prime Minister Giorgi Gakharia has resigned today. He defined UNM head Nika Melia's detention as the reason prompting him to make the decision. In Gakharia's words, he deems enforcement of even a lawful measure against a specific person at the expense of Georgian citizens' health, life, and the risk of an escalation of domestic tensions inadmissible.