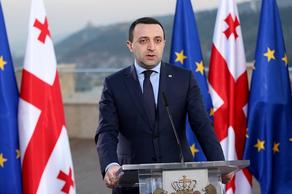 Georgian Defense Minister Irakli Gharibashvili responded to the 12th anniversary of the start of the Russian-Georgian war and expressed hope that the occupation of Georgian territories is temporary.

"Today marks 12 years since the start of the Russian-Georgian war, which claimed the lives of our fellow civilians, soldiers, and police. I respect and bow to their memory.

Despite the occupation of Georgia's territories, our heroic soldiers, in an unequal battle, at the cost of heroism and sacrifice, were able to maintain Georgian statehood.

I believe that the occupation of our territories is temporary. With our pragmatic and peaceful policy, we will be able to de-occupy and unite Georgia," Irakli Gharibashvili said.