Kinzinger: every possible measure must be adopted to preserve democracy in Georgia - PHOTO

Kinzinger: every possible measure must be adopted to preserve 6 February, 2020  23:49 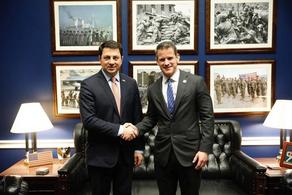 Our positions should not be viewed as messages conveying anger or disappointment; they are gestures pointing to healthy relations between us, American Congressman Adam Kinzinger said at the meeting with the Chairperson of the Parliament and the Georgian delegation. In his words, every possible measure must be adopted to safeguard and preserve democracy in the country.

Archil Talakvadze, the Chairperson of the Georgian Parliament, has paid an official visit to the United States and is now holding bilateral meetings at the U.S. Senate and the House of Representatives.

At the meeting with Adam Kinzinger, the parties discussed the issues of democracy and security. They also focused on deepening the strategic partnership between the U.S. and Georgia. After the meeting with the Chairperson of the Georgian parliament, Congressman Kinzinger said that the U.S. views Georgia as a critical element of its plans.

"The U.S. is interested in the ongoing developments in Georgia, which is why I stress that the dialogue between us must continue, for this is the prerequisite for finding a way out of the existing critical situation. We have held rather productive dialogues on issues in which we have mutual interests, and I do hope that the decision-making process will be rapid and aim-oriented. Our relations are running rather smoothly, and I believe that we will come to a mutual agreement," Kinzinger declared.

Within the meeting, the progress by Georgia on the path to its Euro-Atlantic integration was defined as positive, and the role of the U.S. in this process was emphasized.