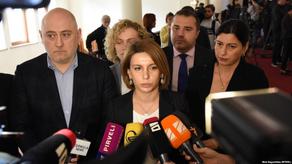 The deputies who left the Parliamentary Majority, officially addressed the Bureau today. According to the report.ge correspondent, their appeal has already been submitted.

As for the Foreign Relations Committee Nino Goguadze and Dimitri Tskitishvili are also leaving.