Levan Varshalomidze is returning to Georgia 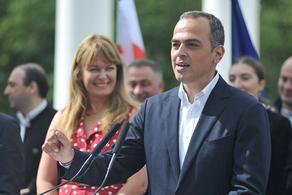 The member of the National Movement Party, Levan Varshalomidze, is returning from Ukraine to Georgia.

The former Head of the Adjara government has recently publicized the video address from Trabzon. According to him, he will reach Sarpi in a few hours. He plans to join the pre-election campaign.

According to him, it is an economic meltdown and breakdown of the state institutions. He says he is returning to win over the “Russian Dream.”

“If anyone thought I would prefer staying comfortably in Ukraine, having a good job, it is a mistaken thought. I am in Trabzon and will be in Batumi in two hours to get rid of the imposed Russian Dream by a joint effort with you. Let us stop economic meltdown and let us together overcome this historical misunderstanding. Together we will win,”- states Levan Varshalomidze.

Reminder: Levan Varshalomidze was appointed the Head of the United Investment Fund of Ukraine.