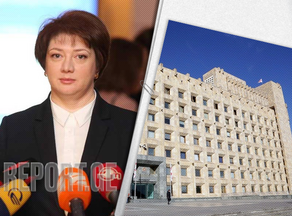 According to the Constitution of Georgia, the authority of the Prime Minister is terminated upon resignation.