Majority left by another deputy 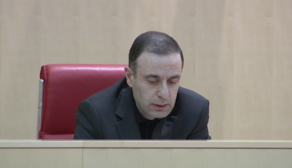 Aleksandre Erkvania has left the Majority. Erkvania form now on will have the status of an independent deputy. He was nominated to the Parliament by a quota of the Patriarchy.

According to the lawmaker, the decision was made amid the recent developments, including the electoral system, as well as the scandal surrounding the Patriarchate. He had no consultations with the team about his decision.

"I have not met anyone and had no consultation," the Deputy said.

Ekrvania is the 14th deputy to leave the Majority.