Mdinaradze about the act participants: they are for Europe 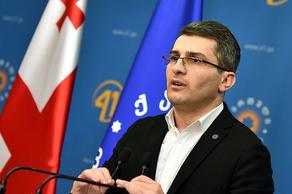 The Vice-Speaker of the Georgian Parliament, Mamuka Mcinaradze, speaking about the people that have arrived in Tbilisi to attend the European Days’ final event, said that all people who support Georgian Dream and its European course are attending the current event.

“Some of the representatives of the political parties and their supporter media companies are in a panic, breaking into the transport, recording hundreds of interviews, selecting one with the bad feedback which is good for them… They are in such a panic situation. Don’t panic, nothing bad is occurring, only good! These people are for Europe and support the Georgian Dream team, which is firm in its western orientation, which is declared in our Constitution”, - said Mamuka Mdinaradze.