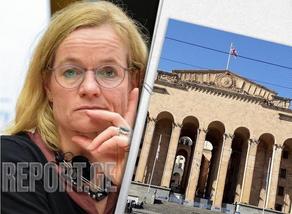 MEP Viola von Cramon has responded to the Georgian Dream's recent decision on repealing the agreement by Charles Michel with her tweet, which reads as follows:

In her other tweet, Cramon said that ''the biggest opposition party UNM not even made an effort to sign this joint agreement with the EU. So, both sides play a terrible political game on the back of their citizens.''