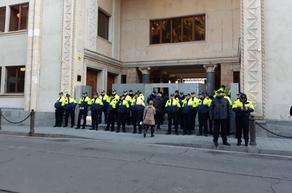 Patrol police is mobilized outside the legislature where metal barricades have already been removed.

The Head of the Patrol Police told report.ge that the police will act according to the situation.

“I cannot tell you in advance whether the road will be blocked or not. Police are on site to prevent conflict and ensure public safety. Yesterday barricades were set for security reasons  to prevent the protesters from picketing the Parliament entrance or performing any other provocation", Vazha Siradze told report.ge.

The opposition wanted to picket the Parliament entrances yesterday as well, but police placed metal barricades, preventing them from doing so.