Mikheil Saakashvili: I will join one of these columns 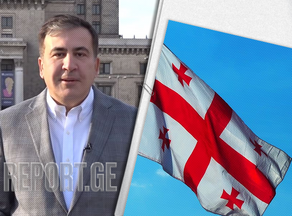 The third President of Georgia, Mikheil Saakashvili, publishes another post on the social network and addresses his supporters.

"Everyone should understand that voting for "Georgian Dream" will be the signing of a death sentence for Georgia. Therefore, on October 2, we must all go and vote to save Georgia. And on the morning of October 3, we should move from all over Georgia to Tbilisi to defend the election results. I, too, will join one of these columns.

So my request is for the columns to be numerous and powerful so that they can not stop me. If the usurping government manages to arrest me before, it should further strengthen our power. In both cases, I will not back down, and I hope you won't either," Mikheil Saakashvili wrote on the social network.

Mikheil Saakashvili released a video address where he stated that he was in Batumi.

Before publishing the video, Saakashvili wrote on the social network that he was already in Georgia.

As report.ge was told in the MIA, Saakashvili has not crossed the Georgian border.