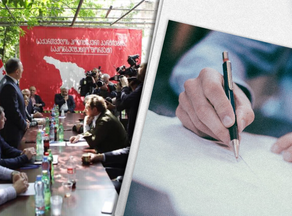 Opposition parties have signed a code of conduct at the Labor Party office.

Gathered at the party office, they agreed on a four-page official document released by the Central Election Commission on Saturday, September 12th. The opposition parties signed the document without the ruling party.

According to the Labor Party leader Shalva Natelashvili, the opposition will not cooperate with the Georgian Dream because the ruling team wants to destroy the country.

According to the Code of Conduct, parties must agree not to obstruct the campaign of rivals, not to use various discrimination methods, to recognize the rule of law, to protect the electorate's rights and the electorate, to refrain from slander, discrimination, and xenophobia.

The document includes four chapters, each of which contains up to 10 specific recommendations.