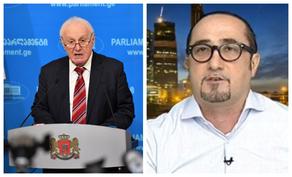 Member of the European Socialists, MP Pridon Injia, made a statement at the plenary session and asked President Salome Zurabishvili to pardon Levan Mamaladze, a former high-ranking official abroad.

"Our president makes a decision on amnesty for convicts, according to her principles and views. Some convicts were pardoned on request due to various political situations. Why can't we pardon Levan Mamaladze? A person who has not been in Georgia for almost 19 years. Levan Mamaladze is neither my friend nor relative; I just know him. If he stole anything, we would find out during these 19 years. If the rule of law does not apply to everyone, we will not be able to build a state governed by the rule of law," Injia said.

Mamaladze left Georgia after the United National Movement came to power. He is accused of extorting a particularly large amount of bribe. In 2006, he was sentenced to 17 years in prison.