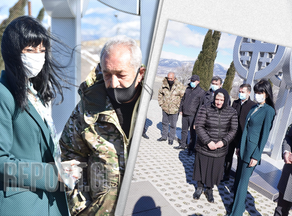 Alexandre Khojevanishvili, the Deputy Head of the State Security Service, and Davit Nozadze, Mtskheta-Mtianeti State Representative, were present at the Mukhatgverdi Brothers Cemetery along with Tea Akhvlediani.

"Today, we honor the man who bravely sacrificed his life to protect the dignity of his homeland. Archil Tatunashvili is one of the examples of heroism and devotion in the history of modern Georgia. His torture and brutal murder embodies the occupation regime and shows the destructive force and evil we are facing to the whole world. It is not only the tragedy of Archil Tatunashvili's family but the tragedy of the whole of Georgia. Today, the international community stands firmly by our side in achieving the Georgian government's goal to restore trust between war-torn societies. With our peaceful policy, we will ensure that a tragedy like this one is not repeated and see unified Georgia. I sympathize with Archil Tatunashvili's family and wish them endurance," Tea Akhvlediani said.

Three years have passed since the murder of 35-year-old Archil Tatunashvili, who was engaged in small business in occupied Akhalgori. In 2018, after one of the arrivals in the settlement, the so-called law enforcement officers of the occupied region arrested him. The next day, the de facto security committee said Tatunashvili resisted the security, fell down the stairs, and died at the hospital.

Tskhinvali has been refusing to hand over the body for almost a month. An examination conducted in Tbilisi revealed that the deceased had more than a hundred injuries on his body.

A Georgian court has sentenced Tatunashvili's killers, but they remain unpunished.